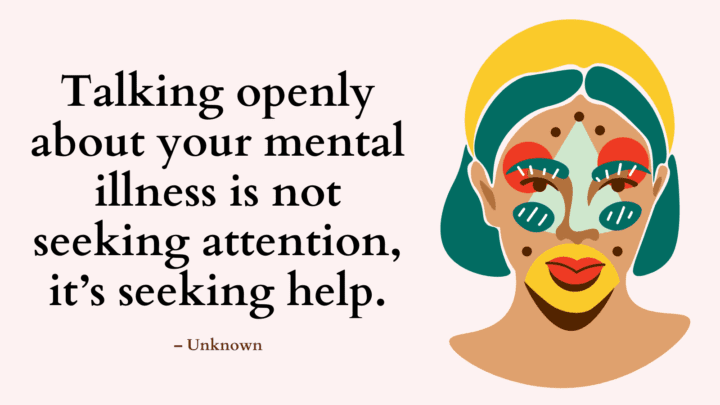 This post contains some of the best alexithymia quotes that will make you feel seen.

Alexithymia is the inability to identify and describe emotions.

Alexithymia means ‘without words for emotions’ (from the Greek a = lack, lexis = word, thymos = emotion).

Individuals with alexithymia have difficulty recognizing emotional states as they are happening, and they also struggle to recognize and respond to emotions in others.

The term alexithymia was first coined by psychiatrist Peter E. Sifneos in 1972 after noticing that some patients showed extreme difficulties in talking about their emotions.

There is no formal diagnosis for alexithymia, but according to research, common signs of alexithymia include:

1. “‘No’ seems to be the favourite default response of the alexithymic person. Even when asked a positive question like ‘The weather is fine, would you like to go for a walk?’, it is not unusual for an alexithymic individual to respond with a negative: ‘No… well I’m not sure… do you think it’s going to rain?’, even if trying to affirm their willingness to participate.” – Jason Thompson

2. “Alexithymia is often misunderstood to consist in a lack of emotions, or a refusal to disclose one’s feelings to others. It is neither of these.” – Jason Thompson

3. “At most they might have an uncomfortable sense of something changing inside their body – increased heart rate, blushing or butterflies in the stomach – and when pressed to give an account of their feelings, the alexithymic will have no words to offer, may fumble with a contrived answer or simply change the subject.” – Jason Thompson

5. “For those with alexithymia, interpersonal interactions are distinguished by coldness and distance, low empathy, and a general indifference toward others.” – Linden R. Timoney

7. “Individuals with alexithymia experience confusion when they attempt to identify their own feelings.” – Linden R. Timoney

8. “Individuals with alexithymia have difficulty recognizing emotional states as they are happening. They may on later reflection gain a vague sense that they were in the grip of a strong emotion, like tearful sadness or rageful anger, but are usually at a loss when trying to piece together what caused such emotions to manifest; that is, they cannot picture what stimulated the mood.” – Jason Thompson

9. “Not only are those with alexithymia unable to properly understand their own emotional states, they also demonstrate deficits comprehending the emotions of others.” – Linden R. Timoney

10. “People who suffer from alexithymia tend to feel physically uncomfortable but cannot describe exactly what the problem is. As a result they often have multiple vague and distressing physical complaints that doctors can’t diagnose. In addition, they can’t figure out for themselves what they’re really feeling about any given situation or what makes them feel better or worse. This is the result of numbing, which keeps them from anticipating and responding to the ordinary demands of their bodies in quiet, mindful ways. If you are not aware of what your body needs, you can’t take care of it. If you don’t feel hunger, you can’t nourish yourself. If you mistake anxiety for hunger, you may eat too much. And if you can’t feel when you’re satiated, you’ll keep eating.” ― Bessel A. van der Kolk

11. “Some alexithymic individuals manifest sudden and unpredictable episodes of crying, laughing, aggression and other emotional displays which are out of proportion to the aggravating stimulus, or discordant with the specific event. When questioned regarding the reasons for the outburst, they are often unable to link the behaviour with any memories or provocations, and may manufacture an excuse.” – Jason Thompson

12. “The alexithymic communication style is object-tied and logical, with a striking absence of poetic undertone which might reveal deeper resonances of psychic life. The alexithymic individual’s choice of language is used to seal off access to inner mental life and to prevent the formation of meaningful emotional connections between their internal world and other people.” – Jason Thompson

13. “Learn to familiarize yourself with the possible signs of emotion, such as a racing heart, feeling faint, blushing, breathlessness, body-tension, goose-bumps, butterflies, sickness or pain in the stomach. When such symptoms appear it will be difficult for you to distinguish whether these signs are from emotions or physical illnesses, such is the conundrum posed by alexithymia.” – Jason Thompson

Related: How To Be Gentle With Yourself? Top 5 Ways To Practice Self-Compassion

What To Do About It?

Recognize Your Bodily Sensations As A Sign of Emotions

When bodily sensations arise (e.g. racing heart, blushing, breathlessness, feeling faint, body-tension, goose-bumps, butterflies or pain in the stomach), consider that these could be signs of emotions rather than physical illness.

Try to make a connection between these bodily sensations and current circumstances to understand what feedback they have for you.

For example, body tension could be a sign that you’re feeling angry and that you’re facing some form of injustice.

Therapy helps you learn different techniques to improve recognition of spontaneously produced bodily sensations and emotions related to them.

Psychologist Locator and the National Register are two websites for locating psychologists in the USA.

Online therapy is also an option. It can be much more affordable than in-person therapy, but can be equally effective. (source)

(Disclaimer: This is an affiliate link, which means I receive a commission at no extra cost to you if you choose to use this link. You will get 20% off your first month)