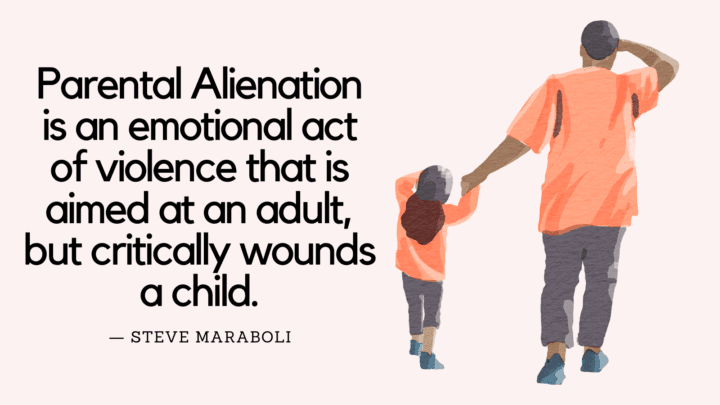 This post contains parental alienation quotes that will make you feel less alone.

What Is Parental Alienation?

Parental alienation refers to the attempt of one parent to disrupt the relationship between the child and the other parent.

According to Gardner, PAS occurs when one parent successfully manipulates a child to turn against the other parent in the absence of a rational and legitimate cause (such as abuse or neglect).

Gardner noted that children with PAS report that they despise or are frightened of their parent and steadfastly refuse to have any relationship with them.

The PAS theory has not been recognized by the American Psychiatric Association or any other medical or professional association, and that its misuse in family courts has led to widespread dismissal of legitimate testimonies regarding abuse, which has caused the deaths of hundreds of children per year ultimately being murdered by the abusive parent. (*) (*)

However, the DSM-5 has a code for “child affected by parental relationship distress,” which PAS would fall under.

Related: How To Divorce Without Hurting Your Child?

Psychologist Douglas Darnall (1998) has identified three types of parents who undertake to alienate their children from the other parent: naïve, active, and obsessed.

According to Darnall most, if not all, parents occasionally will naively make negative comments about the other parent.

However, most naïve alienators support the child’s relationship with the other parent.

Active alienators understand that they should try to support the child’s relationship with the other parent.

Their objective isn’t to disrupt the relationship.

Yet, they sometimes let their anger and hurt cause them to lose control over what they say or do.

Obsessed alienators intentionally aim to destroy the child’s relationship with the other parent.

They can’t separate their own negative feelings toward the other parent from the child’s independent relationship.

Oftentimes, they may even convince themselves that the other parent is abusive and that it’s their duty to save the child from this parent, even though they have never abused the child.

1. “Parental alienation describes a family dynamic in which one parent believes the other parent is behaving in a manner that is likely to turn the children against him. Other terms used interchangeably include gate-­ keeping, hostile aggressive parenting, and visitation interference.” – Amy J. L. Baker

2. “Alienation: the attempt on the part of one parent to disrupt the relationship between the child and the other parent. In its extreme form parental alienation can evolve into what is known as parental alienation syndrome (PAS).” – Amy J. L. Baker

3. “According to psychologist Douglas Darnall (1998) there are three types of parents who undertake to alienate their children from the other parent: naïve, active, and obsessed. In his experience most, if not all, parents occasionally will behave as naïve alienators, making negative comments about the other parent such as, “Your father better be on time. He has no idea how wrong it is to be late picking you up.” Despite momentary lapses, naïve alienators usually support the child’s relationship with the other parent.” – Amy J. L. Baker

4. “Active alienators understand that they should try to support the child’s relationship with the other parent but sometimes let their intense hurt or anger cause them to lose control over their behavior or over what they say.” – Amy J. L. Baker

7. “Dr. Gardner concluded that the combination of symptoms repetitively observed in these children, along with a recurring programming of the child by a parent against the targeted parent, formed the basis of a syndrome. He called it the Parental Alienation Syndrome (PAS).” – Linda J. Gottlieb

8. “Gardner (1998) believed that the most appropriate response was a court-ordered therapeutic intervention to create an opportunity for the child to experience the targeted parent outside the confines of the alienation.” – Amy J. L. Baker

Related: How To Heal From The Father Wound In 7 Steps (+FREE Worksheets)

9. “In the research literature on the effects of divorce on children there are areas of disagreement and even controversy, but there is universal consensus that children who suffer the most are those who have been exposed to intense and chronic parental conflict such as parental alienation.” – Amy J. L. Baker

11. “Waldron and Joanis (1996) speculated that the severity of the effects depends on several factors such as the extent of the brainwashing the child was subjected to, the amount of time the child spent enmeshed with the alienating parent, the age of the child, the number of healthy support people in the child’s life, and the degree to which the child “believes” the delusion.” – Amy J. L. Baker

12. “When it comes to parental alienation or grandparent alienation, we walk around with the overwhelming emptiness of a child’s absence while carrying the heaviness of their sweet and irreplaceable memory…” ― Donna Lynn Hope

13. “It can be surmised that the alienating parents who utilized withdrawal of love as an alienation strategy were in fact practicing the parenting style likely to result in an anxious attachment.” – Amy J. L. Baker

14. “When children have access to information about the targeted parent that children do not usually have about their parents, someone, most likely the alienating parent, is providing the child with information in order to unduly influence him or her. Examples include children knowing or believing that the targeted parent had an affair, is an alcoholic, or is an inadequate lover or provider.” – Amy J. L. Baker

15.  “Parental Alienation is an emotional act of violence that is aimed at an adult, but critically wounds a child.” ― Steve Maraboli

Related: Best 17 Tips On How To Cope With Divorce When You Still Love Him

What Can You Do About Parental Alienation?

There’s no one-size-fits-all solution for parental alienation simply bcause the circumstances are so individual.

In some situations, therapy that attempt to reunite the child with the alienated parent can help.

In other cases, forcing a child to reunite with the alienated parent can be traumatizing.

It can be helpful to use the help of a quality therapist or mediators (court appointed or otherwise).