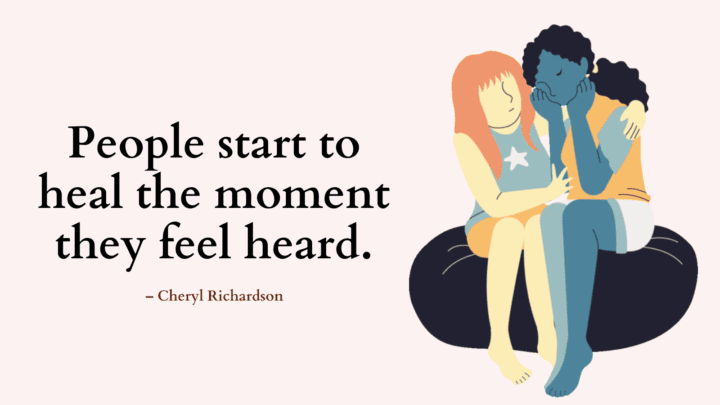 This post contains some of the best absent father quotes that will make you feel seen.

Who Is The Absent Father?

Father absence can be the result of a divorce, separation, death, or alienation.

Father absence can be physical or emotional.

Your father could have been present physically, yet emotionally unavailable.

A wealth of research has shown that children who have experienced parental separation in early life often face developmental and behavioral difficulties through their childhood. (*)

Related: How To Heal From The Father Wound In 7 Steps (+FREE Worksheets)

1. “..daughters of fathers who are absent tend to fill in the missing pieces to construct a complete picture of the man for themselves. This picture may be accurate or inaccurate, but more often than not, it is a favorable one. After all, if you need to construct a father based on few data, you might as well construct a good one.” – Sarah Simms Rosenthal

2. “..many daughters of absent fathers are not even aware of the extent to which their fantasy construction of their father plays a role in their choice of partners.” – Sarah Simms Rosenthal

3. “A father who is physically absent cannot provide his daughter with unconditional love and validation. Nor can he give her a sense of security and the conviction that people are dependable. A young child doesn’t understand why her father is missing. She only knows that he is gone.” – Sarah Simms Rosenthal

4. “According to the Oxford English Dictionary the word absent means ‘the state of being away from a place or person … the nonexistence or lack’. Absence includes the father’s emotional absence, even if he is physically present.” – Susan E. Schwartz

5. “Boys want to grow up to be like their male role models. And boys who grow up in homes with absent fathers search the hardest to figure out what it means to be male.” – Geoffrey Canada

6. “I’ve only ever chosen men who happen to spend a lot of time out of the country, who have jobs that take them all over the world, and I think that’s interesting because my father was absent, and then home, and I’ve always been in relationships where there’s separation.” – Patsy Kensit

7. “Respect to all moms doing double duty because of men failing to do their part as dad.” – John Mark Green

8. “Some women say they felt loved by their father, especially when young. He might have been attentive then and idealized. Often he was projected onto due to his vacancy, emptiness and his just not being there. To compensate, the daughter created images of what she wanted him to be.” – Susan E. Schwartz

9. “The absence of a father sets a daughter up for anguish and disappointment, often killing her creativity and life force. Her endeavours are stamped with depression, anxiety and disturbed relationships.” – Susan E. Schwartz

10. “The absence of father love includes his enactment of ambivalent, inconsistent or downright hostile behaviours with and around the daughter. The world becomes rejecting, and she is static, refusing it all – passion, love, feeling, emotion, being. She needs help out of this incomprehensible catastrophe, help to not take it in and re-create the loss internally and in other relationships.” – Susan E. Schwartz

11. “The disturbance caused by an absent father early in life can set up a daughter to hate and distance herself not only from him but also from other males and be unable to access the range of the masculine and the feminine within herself.” – Susan E. Schwartz

12. “The father is ideally an anchor, giving the daughter a foundation, a solid point of reference. Yet when absent, her experiences of self are achieved against the background of loss. This influences how she does or does not cope with the inevitable vicissitudes experienced throughout life.” – Susan E. Schwartz

13. “The father is supposed to foster emotional life and value but does not. What the daughter gets instead of love is emptiness which she can neither securely attach to nor separate from. This is often accompanied by masochistic and unloving attitudes, mostly turned onto herself. The result is confusion and denial of autonomy. She is, in effect, imprisoned with the absent father and in this place remains unconscious.” – Susan E. Schwartz

14. “The search for the father is connected to the search for herself. It resides in the places she does not yet know. At each stage of a daughter’s development the relationship with her father affects her sense of self. She re-experiences the loss of a father, the premature separation he imposed when he was not there, and she’s left with the anguish of unmet needs.” – Susan E. Schwartz

15. “There is something absent in me, I thought. Something incomplete. Even my mother couldn’t describe me. There was something empty in me that in other people was full.” – Julie Schumacher

16. “When a father is absent, he neglects the relationship with his daughter. He becomes associated with yearning, sadness, frustrated love, anger and rage, oppression and desire. These contradictory feelings cause stress to body and soul, and from this comes the urgent need for the daughter to find herself.” – Susan E. Schwartz

17. “When absent, a father cannot reflect to a daughter a separate and individual self. Instead, he represents a locus of distress, and she searches anxiously and in vain for connection. She is disappointed in the shattering of wishes while retaining an attitude of denial concerning what has happened.” – Susan E. Schwartz

18. “When as an adult, he apologizes for not being present, but makes it all about himself as he could do nothing else, he still remains absent. This leaves a daughter to deal with the residual emotions of anger and dismay, feeling betrayed and abandoned, hesitant, without sufficient care or attention.” – Susan E. Schwartz

19. “What many aren’t aware of is the fact that an inadequate or absent father created losses in your life, and any loss requires a grieving process. Expect that to occur. Welcome it, in fact, because grief is the road to recovery. It enables you to move on with your life.” – H. Norman Wright

20. “This is the cry of a fatherless daughter—the one with the hole in her heart, crying, wounded, searching or wandering, aching inside for an accepting touch or a word from Dad. Some fathers were physically absent. Some were present but absent emotionally.”- H. Norman Wright

21. “Will the daughter of the absent father try to resolve her unrequited love by seeking a man in her father’s image? Or will she hold herself aloof from men, making sure she is not abandoned the way her mother was?” – Elizabeth Fischel

Who we are today is shaped by our father, even if he was absent.

It’s when we understand our father’s influence (or lack thereof) upon our lives, that we can begin to heal and fill the void an absent father has left us with.