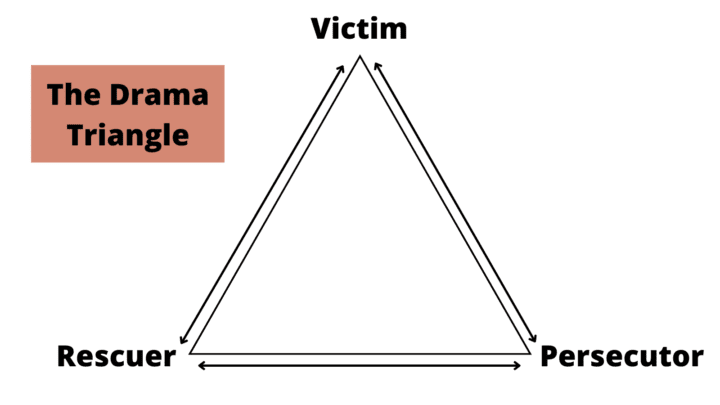 In this post, you’ll learn about Karpman’s Drama Triangle and codependency.

In the late 1960s Dr. Stephen Karpman, a recent graduate of the Duke University School of Medicine, was doing post-doctoral when he started using triangles to map high-conflict relationships.

In 1968, Karpman published what he called “Karpman’s triangle.”

1. Persecutor: “It’s all your fault.”  The Persecutor is controlling, blaming, critical, authoritarian, rigid, and superior.

2. Rescuer: “Let me help you.” The rescuer is the person with the white knight complex, or healer complex, or savior complex. They feel guilty if they don’t rescue the other person. But rescuing can also be manipulative because it keeps the victim dependent. Rescuing also gives the rescuer an opportunity to ignore their own problems by focusing on the other person’s.

Related: What Causes Codependency? Top 6 Reasons You May Be Codependent

Karpman chose the term “drama triangle” rather than “conflict triangle” because the Victim role in his model is not an actual victim, rather someone who feels or acts like one.

Participants in this drama triangle tend to occupy a role learned in their family of origin but can switch roles later on as the drama unfolds: A Persecutor may become the Rescuer, or the Victim, the Rescuer may switch to the Victim, etc.

The more frequent the switches of roles, the more intense the drama.

Codependency: A Disease of Lost Selfhood

Codependents turn their responsibility for their own life and happiness over to other people.

They become so preoccupied with others’ needs and behavior that they neglect themselves.

As a result, codependents lose touch with their own beliefs, thoughts, feelings, needs, sensations, and other internal experiences.

In this sense, the remedy might sound simple: We just need to have a healthy balance of awareness of our inner life and outer life.

But this balance isn’t easy to achieve, especially when martyrdom has been modeled for us or demanded from us and when emotions were never managed in healthy ways.

Related: How To Overcome Codependency In 12 Steps?

The Drama Triangle and Codependency

A habituated Victim and a habituated Rescuer can be in a codependent relationship.

Each participant is receiving a psychological payoff for continuing to play their habituated role.

The Victim gets their needs met through the Rescuer and the Rescuer feels useful and continues to enable the Victim.

This makes the dynamic difficult to break because both parties are in denial about the payoffs each is receiving.

How to Escape the Drama Triangle?

If you see yourself as a Victim, it’s important that you start considering your role in what’s happening to you and in perpetuating the codependency triangle.

If you’re a Persecutor, you’ll need to respect others’ boundaries and learn how to get your needs met without manipulating or pushing others.

Codependency can be described as a mode of surviving what may feel like an overwhelming situation.

Codependency is not who we really are. It’s only a temporary identification we use to help us make sense of what we experienced and what we may still be experiencing.

Our Worksheets Will Help Support Your Mental Health

If you feel suicidal, please check out this list of hotlines.